Lars Muhl
Close
Login
You can login using your social profile
Connect with: 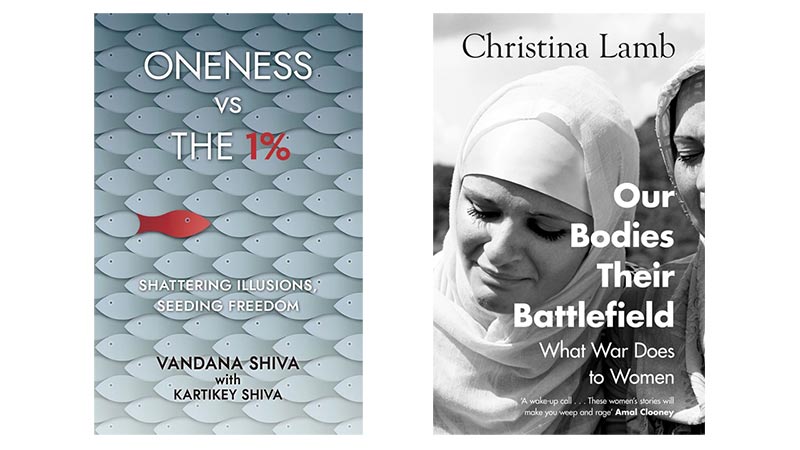 Here are two books that you absolutely have to read: ‘Oneness vs The 1% – Shattering Illusions, Seeding Freedom’ by Vandana Shiva. The other one, ‘Our Bodies, Their Battlefield – What War Does to Women’ by correspondent Christina Lamb. Read about the books here:

‘Oneness vs The 1% – Shattering Illusions, Seeding Freedom’ by Vandana Shiva 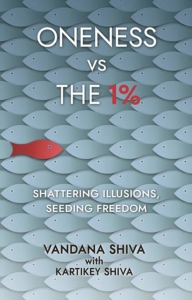 Widespread poverty and malnutrition, an alarming refugee crisis, social unrest, economic polarisation have become our lived reality as the top 1% of the world’s seven-billion-plus population pushes the planet-and all its people-to the social and ecological brink. In Oneness vs. the 1%, Vandana Shiva takes on the Billionaires Club of Gates, Buffett, Zuckerberg and other modern Mughals, whose blindness to the rights of people, and to the destructive impact of their construct of linear progress, have wrought havoc across the world. Their single-minded pursuit of profit has undemocratically enforced uniformity and monoculture, division and separation, monopolies and external control-over finance, food, energy, information, healthcare, and even relationships. Basing her analysis on explosive little-known facts, Shiva exposes the 1%’s model of philanthrocapitalism, which is about deploying unaccountable money to bypass democratic structures, derail diversity, and impose totalitarianism, so that people can reclaim their right to live free; think free; breathe free; eat free.

Vandana Shiva is a world-renowned environmental thinker and activist, a leader in the International Forum on Globalisation, and of the Slow Food Movement. Director of Navdanya and of the Research Foundation for Science, Technology and Ecology, and a tireless crusader for farmers’, peasants’ and women’s rights, she is the author and editor of several influential books, including Making Peace with the Earth, Soil Not Oil; Seed Sovereignty, Food Security: Women in the Vanguard; and Who Really Feeds the World? Shiva is the recipient of over 20 international awards, among them the Medal of the Presidency of the Italian Republic (1998); the Horizon 3000 Award (Austria, 2001); the John Lennon-Yoko Ono Grant for Peace (2008); the Sydney Peace Prize (2010); the Calgary Peace Prize (2011); and the Thomas Merton Award (2011). She was the Fukuoka Grand Prize Laureate in 2012.

‘One of the world’s most prominent radical scientists.’
– The Guardian

‘Her fierce intellect and her disarmingly friendly, accessible manner have made her a valuable advocate for people all over the developing world.’
– Ms Magazine

‘Our Bodies, Their Battlefield – What War Does to Women’ by Christina Lamb 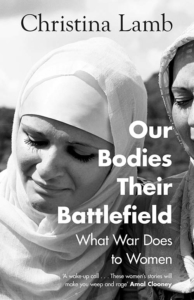 From award-winning war reporter and co-author of I Am Malala, this is the first major account to address the scale of rape and sexual violence in modern conflict.

Christina Lamb has worked in war and combat zones for over thirty years. In Our Bodies, Their Battlefield she gives voice to the women of conflicts, exposing how in today’s warfare, rape is used by armies, terrorists and militias as a weapon to humiliate, oppress and carry out ethnic cleansing.
Speaking to survivors first-hand, Lamb encounters the suffering and bravery of women in war and meets those fighting for justice. From Southeast Asia where ‘comfort women’ were enslaved by the Japanese during World War Two to the Rwandan genocide, when an estimated quarter of a million women were raped, to the Yazidi women and children of today who witnessed the mass murder of their families before being enslaved by ISIS. Along the way Lamb uncovers incredible stories of heroism and resistance, including the Bosnian women who have hunted down more than a hundred war criminals, the Aleppo beekeeper rescuing Yazidis and the Congolese doctor who has risked his life to treat more rape victims than anyone else on earth.
Rape may be as old as war but it is a preventable crime. Bearing witness does not guarantee it won’t happen again, but it can take away any excuse that the world simply didn’t know.

‘A wake-up call to the magnitude and horrors of rape in war – the world’s most neglected war crime. These women’s stories will make you weep, and then rage at the world’s indifference.’
– Amal Clooney

‘Sharing these stories is necessary and incredibly brave.’
– Sheryl Sandberg

‘Christina Lamb has done the impossible – and written women into history … An extraordinary achievement of in depth journalism, powerful storytelling, grit and heart. A wake up call to the magnitude and horror of rape of women throughout history and the world. If you read one book this year, read this. Astounding.’
– Eve Ensler, author of The Vagina Monologues, The Apology

‘For millennia mass rape has been a weapon of war. But the testimony of abuse is almost entirely absent from all recorded history. At last this brave, beautiful and brutal book allows victims to speak – devastatingly, inspirationally.’
– Bettany Hughes

‘This is the most powerful and disturbing book I have ever read. It must have taken courage to research and write this book. Christina Lamb has more than accomplished her duty. It is now our duty to face this terrible truth – that of man’s inhumanity to woman.’
– Anthony Beevor, Spectator

‘A brave and harrowing book, and were there justice in the world, would be at the top of the bestsellers list for weeks.’
– Melanie Reid, The Times

‘[A] deeply traumatic and important book … Provides a corrective that is by turns horrific and profoundly moving … Lamb is an extraordinary writer. Her compassion for those she talks to and deep understanding of how to tell their stories makes this a book that should be required reading for all – even though (and perhaps because) it is not an enjoyable experience … Powerful.’
– Peter Frankopan, Guardian

‘Lamb is a gifted writer … A timely reminder that better outcomes will come only when we start insisting that these stories are heard.’
– Daily Telegraph

CHRISTINA LAMB is one of Britain’s leading foreign correspondents and a bestselling author. She has won 14 major awards including five times being named Foreign Correspondent of the Year and winning Europe’s top war reporting prize, the Prix Bayeux. She is the author of numerous books including Farewell Kabul, The Africa House, Waiting for Allah, The Sewing Circles of Herat and House of Stone. She co-wrote the international bestseller I Am Malala with Malala Yousafzai and The Girl from Aleppo with Nujeen Mustafa. She is a fellow of the Royal Geographical Society, an honorary fellow of University College, Oxford and was awarded an OBE in 2013.